Today, the Gas for Climate consortium published an Action Plan to rapidly implement the targets set out in the European Commission’s REPowerEU communication. The paper presents immediate actions aimed at accelerated scale-up and integration of renewable gases in Europe. If implemented in full, these actions could positively impact Europe’s security of supply, speed up the implementation of climate goals and alleviate part of the energy cost pressure from households and companies.

The REPowerEU communication, building on the previously announced Fit for 55 plans by the European Commission, sets a clear direction for reaching sustainable, affordable, and secure energy supply in Europe as soon as possible. It also proposed substantial additional scale-up of both biomethane (from 3 bcm in 2020 to 35 bcm in 2030) and green hydrogen (from the original Fit for 55 target of 17.7 bcm to now 31 bcm domestic and 31 bcm from imports). It further emphasized the urgent need to facilitate cross-border infrastructure as well as storage capacities for renewable gases.

Now, it will be critical that the REPowerEU plans can be swiftly implemented in full. We propose a set of concrete measures that need to be addressed with urgency: 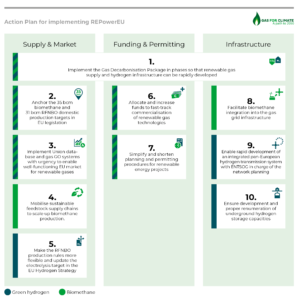