Today, the Gas for Climate consortium published a policy paper which provides an analysis-based rationale on why an 11% renewable gas target is needed to meet the EU’s climate ambition to cut GHG emissions by 55% in 2030. The policy paper follows last year’s Gas for Climate Gas Decarbonisation Pathways 2020-2050 report, which showed how additional policy measures are needed to scale-up biomethane, green and blue hydrogen which are all needed to meet the EU’s climate targets. This policy paper focuses on biomethane and green hydrogen, acknowledging they require additional incentives compared to the incentives required to scale-up blue hydrogen.

To ensure an accelerated and consistent market ramp-up of green hydrogen and biomethane across the EU, the envisioned 11% target is supported by two binding sub-targets for green hydrogen and biomethane. At least 8% of the gas consumed in the EU by 2030 should be biomethane, and at least 3% should be green hydrogen. The sub-targets reflect that biomethane is commercially available today and scalable in a sustainable manner, while green hydrogen should ramp up during the 2020s too. The 3% green hydrogen target aligns with the European Commission target for at least 40GW of electrolyser capacity in the EU. A binding target for renewable gas will help to reduce production costs of biomethane and green hydrogen during the 2020s, while in the long-term help to achieve the European decarbonisation targets at the lowest societal costs. Gas for Climate foresees that an EU-wide target of renewable gas would be translated into differentiated national targets.
The policy paper on renewable gas is the first in a series of policy papers to be launched in 2021. Gas for Climate is currently undertaking new activities including setting up a European Biomethane Alliance, and a new hydrogen demand analysis.

Gas for Climate expands and announces new chair
Supporting the vision of Gas for Climate and its ambition for 2021, DESFA, the Hellenic gas TSO, joined the consortium. Gas for Climate now has members from 9 EU member states. The new chair of Gas for Climate, Marie-Claire Aoun, head of Institutional Relations of Teréga, emphasises: “I am grateful that DESFA joins Gas for Climate at the start of a crucial year for renewable and low-carbon gases in the EU. In this dynamic period, I am honoured to chair the Gas for Climate initiative. We will continue to provide proposals and analyses to reach carbon neutrality in the EU in 2050 at the lowest costs for society”.

Renewable gases have different roles in the system and the wider economy as they provide storable and dispatchable renewable energy, heat to buildings that have gas grid connections, high-temperature heat and feedstock in energy-intensive industries, and fuels to heavy and long-distance road transport, shipping and aviation. They also create future-proof jobs and foster rural economies. Hydrogen is enjoying renewed and rapidly growing attention in Europe and around the world. In 2020, the European Commission and six member states published hydrogen strategies, highlighting its importance as a cornerstone of long-term decarbonisation. Biomethane can realise instant GHG savings and a more circular energy system. Its production is a proven and market-ready technology with little associated technological risks. Biomethane has multiple benefits, most importantly its full compatibility with the existing gas grid.

EU renewables targets are set in the Renewable Energy Directive (RED). Therefore, including the proposed 11% renewable gas target and the sub-targets for biomethane and green hydrogen in the RED revision is the preferred option. Gas for Climate proposes that the 11% target for renewable gas should be implemented as a consumption target, and to be met by economic operators which can be large gas suppliers; similar to the existing renewable fuels target as part of the RED II. As specified in RED II Article 25 (1), member states shall set an obligation on fuel suppliers to ensure that the share of renewable gas within the final gas consumption is at least 11% by 2030. Member States should have the option, to further define the gas consumption target, e.g. set specific consumption targets per end-use sector. 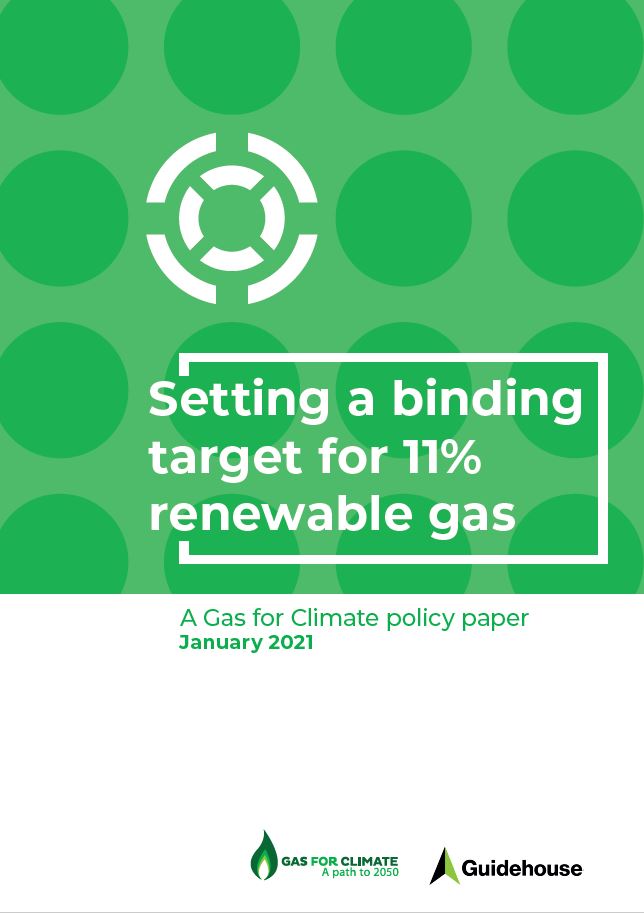