Gas infrastructure needed to scale up renewable gas to 270 bcm by 2050, enabling a decarbonised and renewables-based energy system at lowest costs

Today a study performed by Navigant for the Gas for Climate consortium was published. This study serves as a follow-up to our study published last year, including a greatly expanded scope and analysis.

While achieving 100% greenhouse gas reduction requires large quantities of renewable electricity, by far the most cost optimal role to decarbonise is by combining electricity with renewable gases such as hydrogen and biomethane. Renewable gas adds value in the heating of buildings, for high temperature industrial heat, providing flexibility in electricity production alongside wind and solar and in heavy transport.

Using around 2900 TWh or approximately 270 billion cubic meters of renewable methane and hydrogen in a smart combination with renewable electricity saves society €217 billion across the energy system compared to reducing gas to an absolute minimum. Existing gas infrastructure is indispensable in transporting this renewable and low carbon gas to the various demand sectors. Gas infrastructure can be used to transport both hydrogen and biomethane in 2050.

The Navigant experts foresee an initial important role for blue hydrogen (carbon-neutral hydrogen produced from natural gas with carbon capture and storage), to grow the developing hydrogen market including in new applications. Towards 2050, with increased levels of renewable electricity and falling costs, renewable green hydrogen will gradually replace blue hydrogen, achieving in the end a fully renewable energy system.

In a joint statement, the CEOs of the nine Gas for Climate members said:

The new Gas for Climate study shows that gas and its infrastructure will play an indispensable role in the future decarbonised energy system together with electricity infrastructures. We support the transition to a fully renewable energy system in which biomethane and green hydrogen will play a major role in a smart combination with renewable electricity while recognising that blue hydrogen can accelerate decarbonisation efforts in the coming decades.

The current study is a follow-up of a study published in 2018 by Ecofys, now part of Navigant, now covering almost the full EU energy system. The previous study covered part of the energy system and concluded that if a quarter of current gas demand is produced from sustainable renewable sources by 2050, this can achieve €138 billion of cost savings each year by 2050 across the EU compared to a ‘no gas’ scenario. The consortium presented and discussed the February 2018 study with many policymakers, industry stakeholders, and non-governmental organizations (NGOs). This led to valuable comments, suggestions, and questions. These discussions led to the conclusion that it would be beneficial to have a more comprehensive analysis to assess the most cost-optimal way to achieve a net zero emissions EU energy system, including an explicit analysis of the demand sectors industry and transport. The current report fulfils this need with an updated and expanded scope.

To accelerate decarbonisation, the Gas for Climate consortium believes that by 2050 any natural gas being used in the EU energy system in addition to renewable gas should be low carbon gas. Low carbon gas is blue hydrogen or combining natural gas with carbon capture and storage (CCS) or carbon capture and utilisation (CCU). CCS can be applied in regions where it is technically feasible and politically and socially accepted. CCU can avoid emission if CO2 is permanently stored in products. Eventually, the energy system should become fully renewable.

The study can be accessed here.

Enagás is an international midstream gas company with infrastructures in Spain, Mexico, Chile, Peru, United States, Greece, Italy and Albania. With a 50-year history, Enagás has more than 12,000 km of gas pipelines and 9 LNG terminals. It is certified as an independent TSO (Transmission System Operator) by the European Union and a listed company on the Spanish stock market, Ibex 35. In Spain, Enagás has developed the key infrastructures for the Spanish Gas System, transforming it into an indicator for security and diversification of supply. The company is the main carrier of natural gas in Spain and also the Technical System Manager. Enagás is also a benchmark in sustainability, committed to the fight against climate change through initiatives to promote the use of renewable gases, such as biomethane and hydrogen, and through the development of actions for energy efficiency and sustainable mobility. For more information, go to www.enagas.es

Founded in February 2009, EBA is the leading European association in the field of biogas and biomethane production covering the anaerobic digestion and gasification industries. Committed to the active promotion of the deployment of sustainable biogas and biomethane production and use throughout Europe, EBA has created a wide network of established national organisations, scientific institutes and companies. In 2018, the association counted more than 90 members from all over Europe and has established co-operation with biogas associations from outside Europe. For more information, go to european-biogas.eu

Fluxys Belgium is the independent operator of the natural gas transmission and storage infrastructure in Belgium. Through its subsidiary Fluxys LNG, the company also operates the Zeebrugge liquefied natural gas (LNG) terminal. Fluxys Belgium is a subsidiary of Fluxys, the Belgium-based independent gas infrastructure group active across Europe. For more information, go to www.fluxys.com/belgium

Gasunie is a European gas infrastructure company. The company provides the transport of natural gas and green gas via its subsidiaries Gasunie Transport Services B.V. (GTS) in the Netherlands and Gasunie Deutschland in Germany. The company also offers other services in the gas infrastructure field, including gas storage and LNG. Gasunie commits itself to accelerating the energy transition and to the realization of a climate neutral energy supply. For more information, go to www.gasunie.nl

GRTgaz is a world expert in gas transmission networks and systems and a leading European gas transmission system operator. In France, GRTgaz owns and operates more than 35,000 km of buried pipes and 26 compression stations used to ship gas between suppliers and consumers. GRTgaz is committed to ensuring security of supply to consumers, connecting territories and communities with great care for the environment. GRTgaz delivers innovative and accessible solutions to accelerate and secure a successful energy transition by connecting the energies of tomorrow, driving the growth of renewables and new uses for gas while fostering synergy between electricity and gas systems. For more information, go to www.grtgaz.com

With a gas transmission system spanning 12,000 kilometres, Open Grid Europe, seated in Essen, is one of the largest transmission system operators in Germany. Two thirds of natural gas consumed in Germany flows through our pipeline system, comprising about 100 compressor units and about 1100 exit points. All over the country, our approximately 1,450 staff ensure safe, environmentally-friendly and customer-oriented gas transmission. We also offer the technical and commercial services to go with it, and we provide commercial, technical and IT services for other companies on the basis of third-party arrangements. Moreover, we actively support the European gas market and work together with the European distribution network operators to create the prerequisites for transnational gas transportation and trading. For more information, go to www.open-grid-europe.com

Snam is Europe’s leading gas utility. Founded in 1941 as “Società Nazionale Metanodotti”, it has been building and managing sustainable and technologically advanced infrastructure to guarantee energy security for over 75 years. The company operates in Italy and, through subsidiaries, in Albania (AGSCo), Austria (TAG and GCA), France (Teréga), Greece (DESFA) and the United Kingdom (Interconnector UK). Snam is a principal partner in TAP (Trans Adriatic Pipeline) and is actively engaged in the creation of the Energy Union. The company has the largest gas transport network (about 32,600 km in Italy, over 41,000 including its international subsidiaries) and storage capacity (16.9 billion cubic meters in Italy, over 20 bcm including its international subsidiaries) in Europe. Snam manages the first liquefied natural gas (LNG) plant ever built in Italy and is a shareholder in Adriatic LNG, the country’s main terminal and one of the most strategically positioned in the Mediterranean, and – through DESFA – in the Greek Revithoussa terminal, for a total regasification capacity pro quota of about 6 bcm per year. Snam’s business model is based on sustainable growth, transparency, fostering talent, and strengthening relationships with local communities through the Snam Foundation. As part of the company’s 2018-2022 industrial plan, the “Snamtec” project was launched with the aim of leading the energy transition. The project focuses on technology, innovation and R&D to support both the major Italian and international networks and green economy businesses, such as sustainable transport, renewable gas, hydrogen and energy efficiency. For more information, go to www.snam.it

Teréga has a network of more than 5,000 km of pipelines and two underground storage facilities, representing 16% and 24% of national capacity respectively. Teréga (Transport et Infrastructures Gaz France) is a major player in energy and has been located in South-West France for over 70 years. As part of its public-service obligations, Teréga transports natural gas to more than 400 delivery stations in the most secure, cost-effective, and reliable conditions. Teréga enjoys a strategic position in Europe, where it provides interconnections that guarantee security of supply. Teréga is aware of the vital role of natural gas in the energy transition. Teréga wants to help accelerate the green revolution through increasing involvement in biomethane, natural gas for vehicles, and Power to Gas. For more information, go to www2.terega.fr 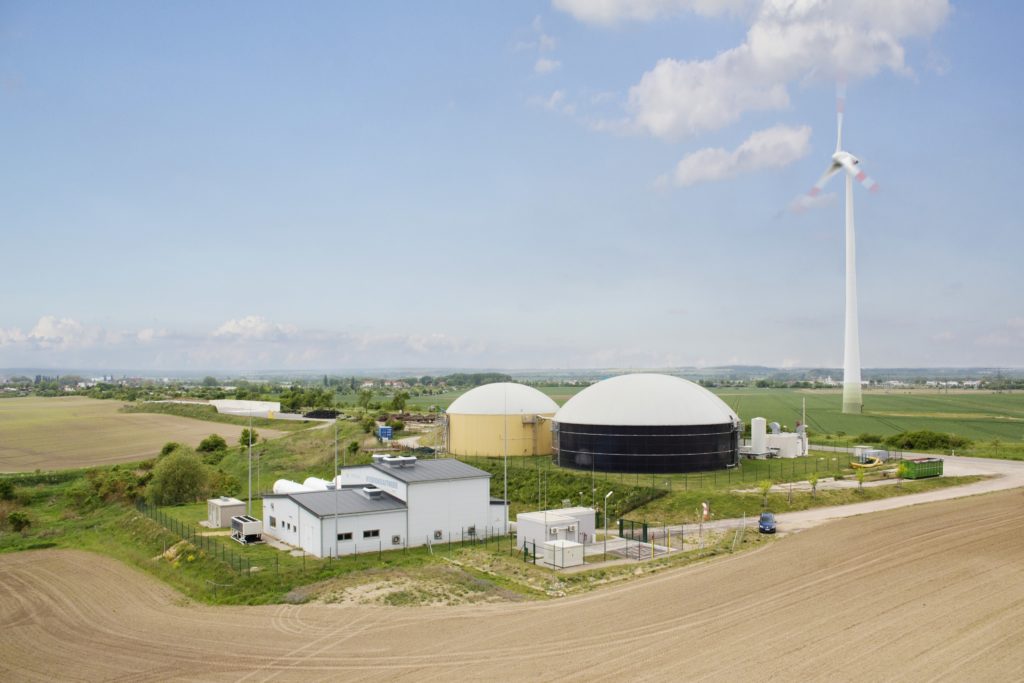